“The only thing we have to fear is fear itself.”
–Franklin Delano Roosevelt 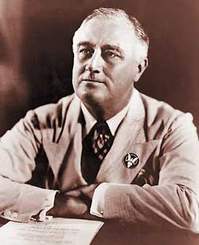 When I was a young seminarian, I suffered from anorexia nervosa.  I learned to starve myself for sake of unnatural thinness.  And this was long before eating disorders became a contagion on campuses around the world.  I suppose you could say I was on the cutting edge of a deadly neurosis, a pioneer in taking things to extremes.

My absolutist-oriented anorexic mind was of the opinion that if you ate one cookie, it was like the Domino Theory of Vietnam:  “If Vietnam falls, so goes all of Southeast Asia!”  (We all know how well that worked out.)  Letting my guard down for even one cookie meant my whole world could fall into utter chaos, overrun by barbaric hoards.

Of course anorexia is not so much about food and thinness; it’s really about fear and control.  What did I fear?  I feared being fat, yes, but that was just the surface.  What I really feared was not being liked, not being loved, not being good enough—that deep, dark, basic human predicament that Brene Brown calls “shame.”  Only if I exercised rigid control over my food could I trick myself into feeling worthy—even special.  Starving myself gave me a false sense of superiority, a kind of self-righteousness characteristic of rigid people.

I felt imprisoned in a tiny cell.  Of course I wanted to be free—I could see happy people through the bars of my window—but I was too afraid to open the door and walk out into the wideness and sunshine.  What if I lost control?  Worse, what if I discovered that I was really just mediocre, nothing special?  Fear was starving me, body and soul.  And it affected everyone around me like an invisible poison infecting the air.

When fear takes on a life of its own, it becomes contagious.  And when there is a contagion of fear, there is the danger of a full-blown famine of the collective soul.  You could say that anorexia is analogous to what’s happening in our own country and in the world today.  I see a form of social anorexia:  rigid ideologies, soul-shriveling theology, and thin-thinking Us vs. Them worldviews—all issuing from that dark place called “fear itself.” . . .